The community from Andap village, New Bataan in the typhoon affected southern Philippines island of Mindanao have to climb over giant boulders and shaky rocky paths to come together for Sunday mass.

The small group nestle together in the few neatly lined pews that survived, with rubble and rocks kicking around beneath their feet. Grey clouds loom overhead, as does the large mural and figure of Jesus on a cross that remained intact on the back wall of the Church.

This small village chapel, with its whole façade demolished and roof hanging precariously, offers little physical shelter for its parishioners to the devastation that engulfs them on all sides.

Typhoon Pablo was one of the most destructive natural calamities to hit the Philippines to date. The total estimated damage caused to infrastructure, housing and agriculture is more than $947 million. An estimated 6.2 million people are affected, across 3,064 barangays (villages), and 34 provinces. 216,817 homes are destroyed or damaged, displacing 973,207 people (226,497 families). These numbers include 2.6 million-affected children – who account for 42% of the affected population.

Operations have turned to relief and recovery mode and efforts are underway to reach those in the remote hills, valleys and across the coastline, where communications have been cut. President Aquino declared a state of National Calamity, following initial confusion about the extent of the damage.

The clear up is only just beginning with devastated infrastructure, and communities still in shock. Although the Philippines has experienced an increased number of violent storms in recent years, attributed to climate change, the clear up operation following typhoon Bhopa is one that the community of Andap, has never had to deal with before.

Andap and its neighbouring communities were completely unprepared for a natural disaster of this scale. Communities in the north and west of the island were better prepared following Tropical Storm Sendong last year that killed 1,200 people.

But the Compostela Valley and the coastal region of Mindanao in this archipelago nation had not previously experienced a storm of this ferocity before. People were unprepared and vulnerable with its poor infrastructure, flimsy homes and high levels of poverty and subsistence living.

The Catholic Chapel now neighbours what is being described as ‘ground zero’ – a newly created riverbed of giant boulders, rock and congealed mud that was created by a massive landslide in the path of the 185-kmp winds.

400 people died in this Municipality alone. Pablo uprooted a path of coconut trees, destroyed buildings, washed away whole communities, and effectively created a new river as far as the eye can see down the lush valley, once rich in coconut trees grown by smallholder farmers.

More people gathered outside the church. Spectators looked on bewildered and silent at the miles of boulders that have buried whole villages and hamlets beneath, leaving no trace of human life behind.

A gushing river has established itself during the on-going heavy rains, and completely cut across the main road, ending its path.

As people gathered at the end of the road to talk about what happened they took photos on their phones, and cameras.

Only part of school remains in the town of Andap, Compostela Valley, Davao, Southern Philippines. Typhoon Bopha struck on 4 December 2012 causing landslides and floods which changed course of the river ravaging homes, and this elementary school in under four-hours. Out of the 6.1 million affected by Typhoon Pablo, over 2.6 million are children. UNICEF has been on the ground since the beginning bringing help, providing water, sanitation, health, psycho-social services, child protection and education to the children and mothers of the region.
© UNICEF Philippines/2013/MBhandari

A group of young teenage boys, playing on a fallen coconut tree trunk, described the roar of the landslide. “At first we thought the crashing noise was the rain and thunder, but later we realised it was the sound of the stones and boulders crashing down the valley from the mountains. It was very loud and very scary.” 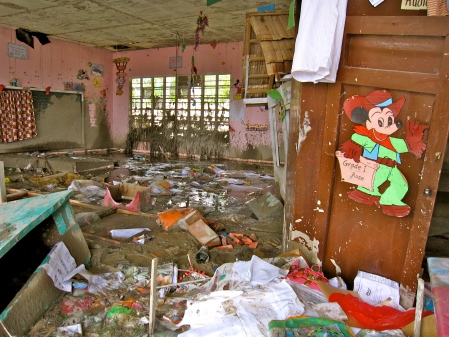 The boys describe how a nearby hamlet of 100 people was reduced to just 14 survivors following the massive landslide.

The immediate needs for shelter, water and food are vast, as are the more easily hidden dangers of psychological trauma, malnutrition and trafficking.

Many parents worked in the coconut industry, selling the dried flesh, known locally as copra. But with such vast crop losses, people are already struggling, and there are reports of children looking for odd jobs to support their families.

Mindanao is already fruitful ground for traffickers, and has been a concern in the aftermath of Pablo for UNICEF and other agencies.

While aid has started to arrive in Compostela Valley, the extent and scale of the devastation in neighbouring provinces is only just becoming clear, with bridges, electricity and communications still down along the east coast provinces in Davao Oriental.

The stunning vista’s along the Pacific Ocean are now pot-marked by what look like townships. The once quaint small fishing town of Boston looks like a giant scrapyard from the road above with collapsed houses and piles of debris mounting ever higher.

The gym, which overlooks the Pacific Ocean, was used as an evacuation centre on the night of the typhoon. It is now gutted and roofless with twists of metal silhouetted against the sky. Children are playing in the street, with basketball the game of choice here in the Philippines. Along the coastal road a boy is playing by himself, bowling an empty plastic water bottle over with a small ball, while others roll themselves down the street on makeshift skateboards.

15-year old Leah is on her bicycle, slow-cycling with her friends. [Name changed]. They are going to volunteer they say to make food parcels for people at the local municipality building, hoping they get something for their help.

Leah describes her home now “like that of a pig,” as they all giggle. “There is nothing. It is very hard,” she says, not making eye contact.

Two of the girls speak about looking for jobs to help their families. “I did some cleaning in a neighbours house the other day,” Leah says.

“It’s very hard at home. But it’s ok, I’m happy-happy,” says Leah as she bursts in to another smile. “But, the hardest thing is my brother died in the typhoon,” she says, turning her face away into the distance, taking a deep breath to hold back tears. “But I’m happy-happy, I have to be happy-happy,” she says.

“Children are resilient, they play, laugh and carry on as normal, even amongst all the devastation and profound stress around them. But, beneath that bravado there’s a great deal of emotional stress that children have experienced,” says Tomoo Hozumi, UNICEF Philippines representative.

“We have to ensure that they have a safe space to talk about what they have experienced. Many will have not only lost their homes and the routine of school, but will now also face the pressure to find work. Many will struggle with the loss of income too, which can place them in potentially precarious situations,” Hozumi adds.

“Children need to re-create routine, especially after the devastation. Engaging them in structured learning activities in a safe and secure environment would help them express their feelings, develop a sense of normalcy, dignity and hope,” says Rohannie Baraguir, Child Protection Officer with UNICEF.

“The scale of this typhoon was unexpected – especially in this area, so we have been working fast to train teachers, child day care workers and other community workers in basic psychosocial support, before schools re-open in the New Year.”

More than 1,000 people were killed in typhoon Pablo on 5th December and 800 people are still missing. More than 1 million people have been displaced, and 200,000 houses are destroyed or damaged.

About one third of causalities are children. The government together with UNICEF and NGO partners have launched a full-scale response in the provision of water, sanitation, nutrition, education and child protection. 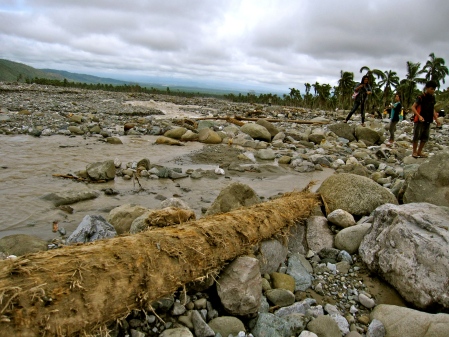