Once again, three provinces have been lashed by rounds of heavy rain. An estimated 25,000 men, women and children have made it to evacuation centres.

But they are only 1.4% of all those affected. Many families remain in remote villages where it’s difficult to take them life-saving care. For most of those affected by recent bad weather, this is the second time their lives have been disrupted in the space of just a few months. 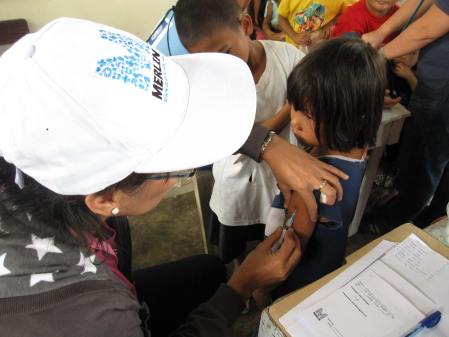 Most people are living under tents or makeshift structures where their houses once stood.

The fields were once thick with rice paddies, and the mountains lush with coconut, rubber and bananas. The total agricultural damage is estimated at $663 million, devastating people’s livelihoods.

Typhoon Bopha swept through largely poor rural areas of Mindanao. In two of the worst affected provinces of Davao Oriental and Compostela Valley people are relying on food rations, and households are reducing their number of meals or limiting their portions.

There are concerns about the risk of malnutrition, particularly among pregnant and lactating women and children. Before the typhoon, children’s nutrition was already a serious concern.

It is estimated that 66,900 children under 5-years are at risk of malnutrition.

Merlin has set up mobile health clinics working in the affected communities, including many in the remote areas of Davao Oriental.

‘The most common diseases we are seeing here are acute respiratory illness (ARI), and children are very vulnerable, particularly as many have weakened immune systems due to poor nutrition,’ says Dr Manny De Lara, Merlin Project Health Officer.

‘Children are at risk in evacuation centres which are usually public buildings with no facilities to cater for families. But plastic shelters are also a worrying concern. Children are living under plastic sheets in very poor conditions, and in weather that no one would want to be out in, let alone live and sleep in,’ says Dr De Lara.

Lucy Didicaturga, a mother with seven children from the village Bana-ao in Baganga says, ‘They’re all sick and complaining of stomach aches and have coughs.’ 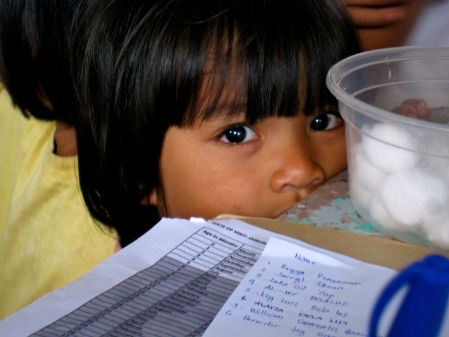 At Merlin’s mobile health clinic in Bana-ao the line of women and children waiting to be seen by the doctor and health team is increasing despite the heavy rain and threat of rivers bursting. The team is screening children for malnutrition, supporting some as outpatients and referring those with severe cases to local hospitals for urgent care.

Merlin is continuing to support people in Philippines whose lives have been turned upside down due to Typhoon Bopha. To help us stay as long as it takes, please donate today.

This story has been adapted from Meena Bhandari’s story. She is a freelance journalist who visited Merlin’s programs in Typhoon Bopha affected areas facilitated by UNICEF and partners Merlin.